Millers on the Season That Never Was 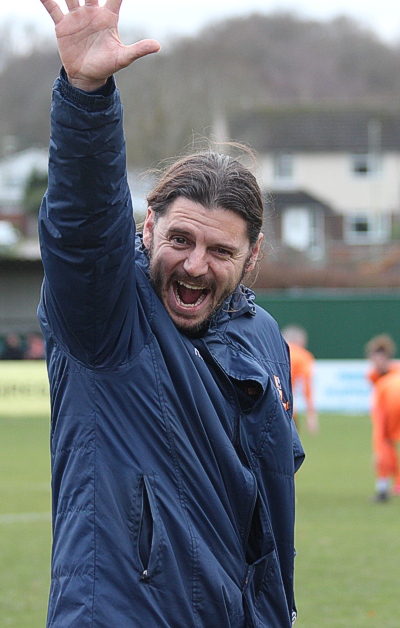 Firstly, I hope everyone is well and keeping safe during these difficult and strange times. I don’t think anyone could have envisioned the situation we find ourselves in would be the outcome of our season, but needs must and I fully back the FA's stance on this.

With a number of teams left with a good amount of games to play, somebody was always going to feel aggrieved with any decision that was made, and I feel for those who were almost over the line. I’m sure, if the shoe was on the other foot, perhaps I’d be singing from another hymn sheet, but as we were not going to go up, nor in any danger of relegation after we enjoy our break (if one can 'enjoy' staring at the same 4 walls day in, day out) we will simply prepare for another season at step 3!

There is obvious disappointment surrounding the termination of our season. From a playing point it was fairly obvious we had the team/squad we wanted and were preparing for another end-of-season assault on the form guide. Having won 4 from our last 5, including a few decent scalps along the way, we had every right to feel optimism going into the last 16 games. We had gone from a very dogged, defensively resolute, well organised team at the start of the season, that stayed in games by any means necessary, to a very fluid, exciting attack-minded team, and I have no doubts which team the supporters preferred!

Both the players and coaching staff would like to thank you all for the support you showed at all stages this season. I realise at times our football wasn’t overly pleasing on the eye, but at all times I felt we showed a good spirit and commitment to the cause. I also think the players deserve a great deal of praise: it’s not easy getting yourself up for games in which you know, regardless of how you play, it’s going to be a tight affair. How many games were won or lost by a small margin or single goal at periods of the season - something that had clearly been sorted come our last 5 games or so!

On a personal note, looking back at where we were a year ago and the fans' forum, with Nathan and I, we read too much into our great end-of-season form and some of the great days out we had. Finishing strongly is sometimes false, as many teams have 'downed tools', cut budgets etc., so games aren’t as competitive as they are in the early months. I could never sit in front of you and tell you that if we finished 4th bottom, that would be a creditable finish with the resources that we have available. Privately I obviously wanted more, but I would have taken survival in order to build something sustainable for the long term. I would never set the bar low and make that public, as it sends out completely the wrong message to players and supporters alike. But far bigger clubs than us, with far greater aspirations, have suffered worse fates.

We have learnt a lot in our second season and I am truly grateful for the experience. We’ve had some good days, some frustratingly agonising days where we deserved far more than we got, and we had a few days in which we had nobody to blame but ourselves. Throughout it all, though, I only feel like we were truly outclassed once: 45 mins at home to Hayes. But even then, we rallied and showed our spirit in what for them could have been a very embarrassing 2nd half. Our goal as always was to be competitive in every match, and I think that was achieved.

Although we’ve still got a number of weeks until the official closure date of our season, we have started the process of informal discussions with our players, and every one of them is positive about next season and their intentions to be in orange. Obviously that’s a long way off and a lot can change in football. However, they recognise what we had before play was stopped.

Already this is a very tightly knit group, and it became apparent early on that not only did they enjoy playing together, they also liked being around each other, which is worth points by way of spirit. It’s been mooted that it is the best team we’ve had, and without being detrimental to anyone who has pulled on the orange, this season or seasons gone by, with a few exceptions I would agree. Player for player, in every position throughout the squad there was quality... and a good person as well.

I hope they all stay. Likewise the players out on loan and who have all played a part, to whom the door is rarely shut.

We’ve got a lot to be positive about going forward, and even if there will be no external records for this season, it’s fairly safe to say we’ve survived 'second season syndrome' and can now truly look to establish ourselves for the longterm at step 3.

I’d like to thank everybody that has been involved this season, as you’ve all contributed in some way. From the players staying positive, those many volunteers working so hard to make the club a great place to be, and to all you loyal supporters who have watched through all conditions both home and away (some games very far away!). The coaching staff have again been brilliant behind the scenes, preparing the players and supporting myself, sometimes to the detriment of their wallets as they gave their time for free.

I look forward to seeing you all at some stage in the near future, once we are back into the swing of a regular routine, and please don’t forget to check the website as we will be looking to host a number of events in the near future to support the club. Enjoy your summer.
UTR
Millers

The Club is delighted to welcome Honey Brothers as main sponsor of our Reserve Team for the coming 2019/20 season. Established in 1955, the company is a hugely experienced Arboricultural and Garden Machinery supplier offering a wide range of premium brands with exceptional service. The company's sponsorship is to include the Honey Brothers name on the front of the Reserve Team home playing shirts, along with two pitchside advertising boards reinforcing their support of the Club.

Honey Brothers Operations Manager, Jo Barton-Taylor, said "It is great to be on board with the club. Over the past few years we have grown significantly and are in the process of building a brand new retail store on our current site to cope with the plans we have for expansion. The sponsorship will help spread the story about who we are and what we offer."

A sunny Sunday afternoon saw the naming of The Bill Mitchell Stand in honour of the Club’s President, attended by family and friends. Bill has been involved with HWFC under many guises for a number of decades, and his father before him. 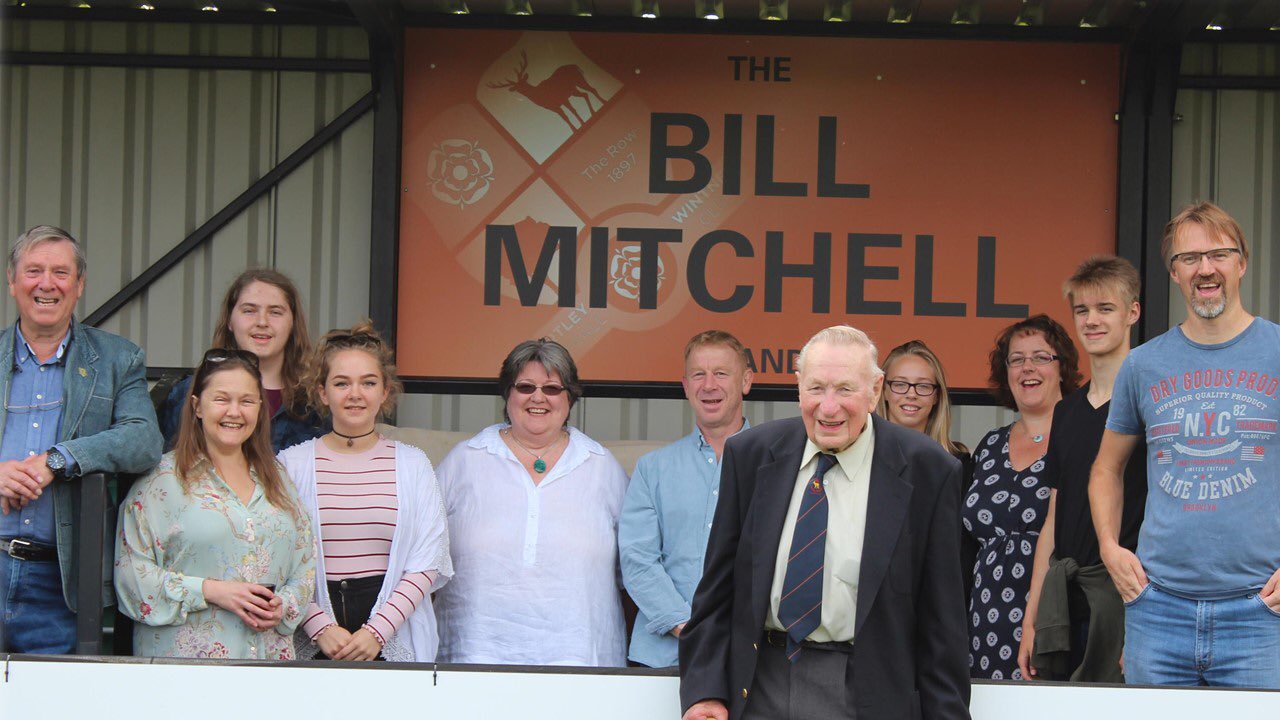 There are not enough words to thank Bill for all he has done, not only for Hartley Wintney FC but for other Clubs and organisations in the village.

Bill, always our friend, a great story teller and Club President - thank you so very much for your continued support and love of the Club.

Net World Sports to the Rescue!

We were contacted by Net World Sports who were in search of football clubs that would benefit from some new equipment from their extensive range of sporting goods, for use by one or more of the club's sides. We called Net World Sports and they very generously offered to supply goods from their FORZA football range. The FORZA range is extensive, and we looked at a number of available products.

With the current inclement weather, our main pitch is suffering from severe waterlogging issues. These weather issues have resulted in the postponement of many of our first team home matches and consequently deprived the club of the much-needed income that keeps the cub afloat. Searching the Net World Sports online catalogues, and whilst not specifically football orientated, we found cricket flat sheet outfield covers which are ideal for covering the vulnerable areas on the pitch.

After discussions with Ryan in the Marketing Team at Net World Sports, they very generously agreed to provide us with a 25 x 4 m flat sheet cover, as well as 2 sets of crowd separation barriers. The lay flat sheet gives us a fighting chance of beating the elements and hopefully getting our home games played. The significance of playing first team home games cannot be overstated. Quite simply, it is the key to the Club's survival. 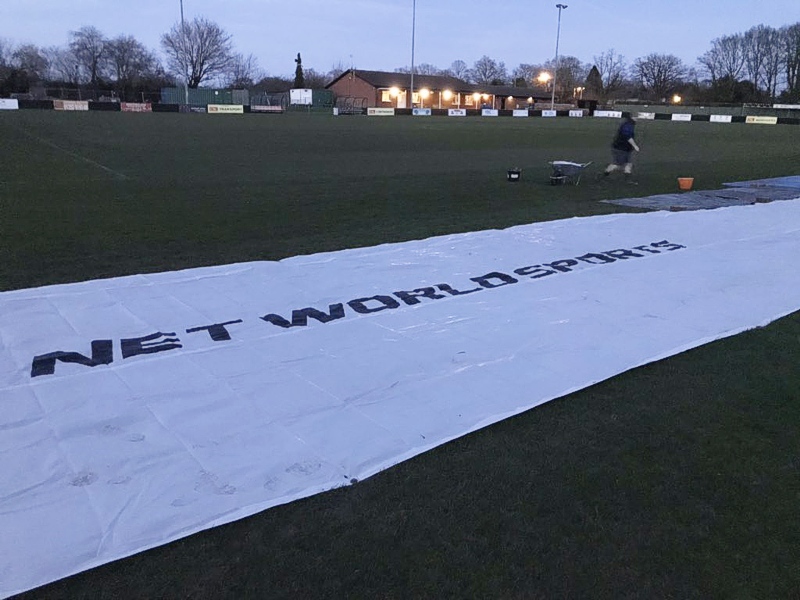 The Crowd control barriers will be used to channel supporters on match days and will be made available to the Junior Club for respect barrier purposes.

The pitch is also used by our Reserves and Under-18 Midweek Floodlit teams. As a club we aim to keep eleven-a-side football alive and, to that end, we also run a Sunday Open age team and two Veterans Teams. This equipment will go a long way to ensuring we can keep football alive in Hartley Wintney.

I would also comment that the delivery was on a next day basis and enabled our band of volunteers to get the sheet laid in time to hopefully hold back the current vagaries of the weather. [LM]

The Club is happy to announce Sean Hayes as Reserve Team Manager for the 2019/20 season. Sean captained Hartley ‘A’ last season, helping the team to success as Aldershot & District Senior League Champions. He is now looking forward to management and will be assisted by coach, Sam Cave. 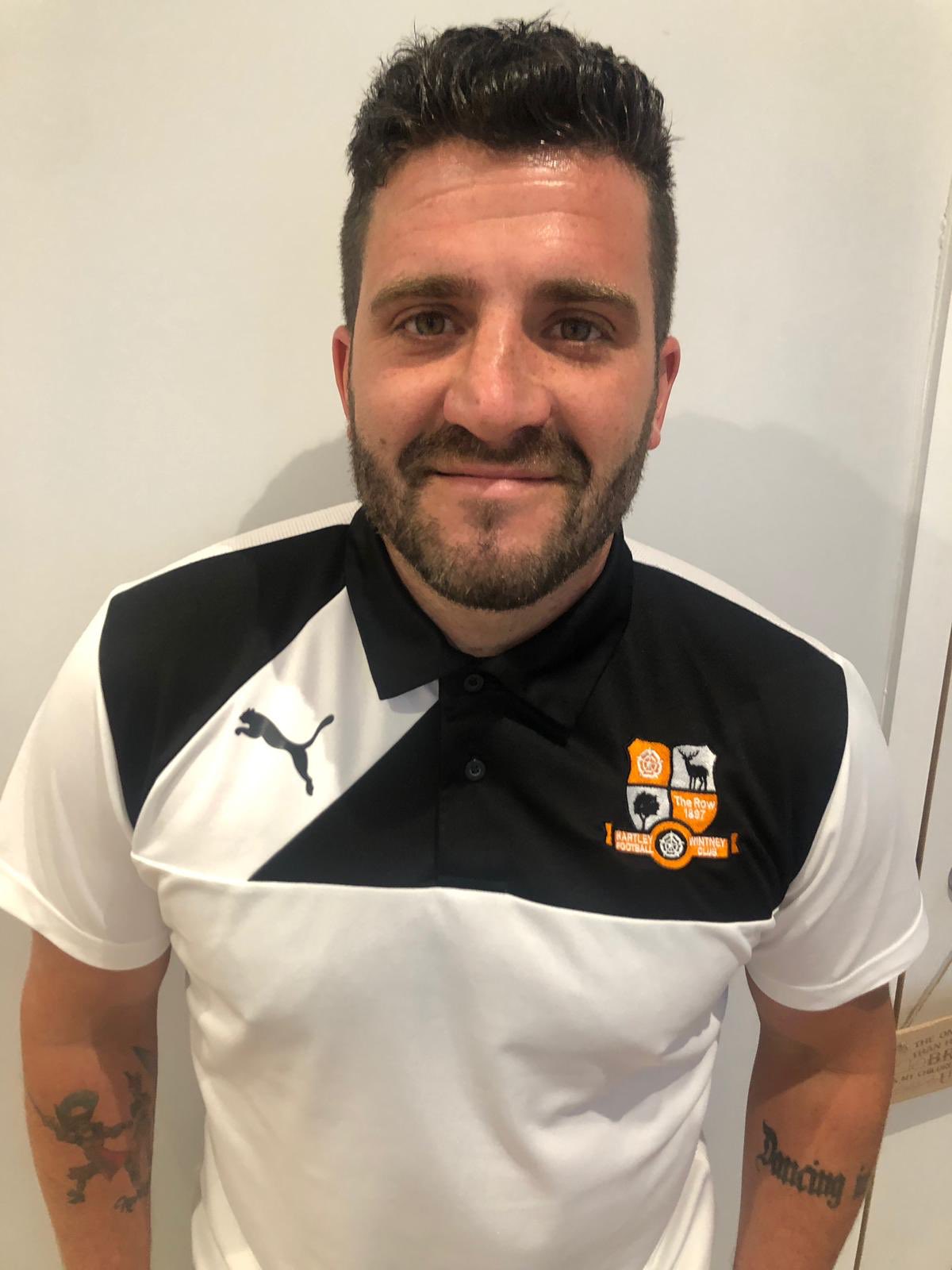 Already well known around the Club, Sean was delighted to at his appointment, following discussions with Anthony Millerick.
“I’m really looking forward to the challenge, buzzing to get started.”
The Club is very grateful to Ricky Hogsden and Neil Lancaster for their work with the Reserves.

BOSS Professional Supporting The Row into 2019/20

Following our history changing first season at Step 3 and finishing 2018/19 as the premier Step 3 Club in Hampshire, we owe a huge 'thank you' to BOSS Professional Services for their continuing sponsorship and support of Hartley Wintney FC for the coming 2019/20 season.

BOSS to continue their sponsorship into 2019/20

The company is a market leading ERP consulting and recruitment business, the BOSS Recruitment brand being one of the fastest growing recruitment companies in the UK. It is an honour for the Club to have such a successful, high profile business supporting the team as we continue our amazing football adventure.

Centre-back Jack Ball secured the votes of the Row supporteres to win the 2018-19 end-of-season award. Jack contributed hugely to last season's promotion and has continued with performances that provided much needed consistency in what became, for a short period, a rollercoaster ride in the Premier Division. Strong defensively and with the knack of scoring important goals, it's easy to see why Jack received the bulk of the votes from the Row faithful. Well done Bally!