Hartley Wintney welcomes striker Shamar Moore to the club. The 21 year-old joins us from Bracknell Town.

Shamar began his career as a youth team player with Reading before moving up to the Royals' U18 team in July 2017. He made the move to Cardiff City's U21 side in the summer of 2019, staying with them for the 19/20 season before joining Bracknell Town in September 2020.

Shamar played a part in Bracknell’s 2021/22 Championship Winning side in his first season in senior football. He made his debut for the Row away at Hayes & Yeading United on 19th November, coming off the bench in the second-half.

Commenting on his latest signing, Hartley Wintney first team manager, Ian Selley, said, "Sham has come into training a few times now and featured off the bench on Saturday. He has lots of experience, an eye for goal, and we are hoping he'll fit in well with how we like to play."

Selley continued, "We are spoiled for strikers at the moment, but Kyen picked up a slight groin strain just before half-time at Hayes and Yeading, so we'll need to see how he goes over the next few days. Sham may get his opportunity very soon and we'll see how he goes within the team. He certainly has the potential to score a good lump of our goals if he gets the service." 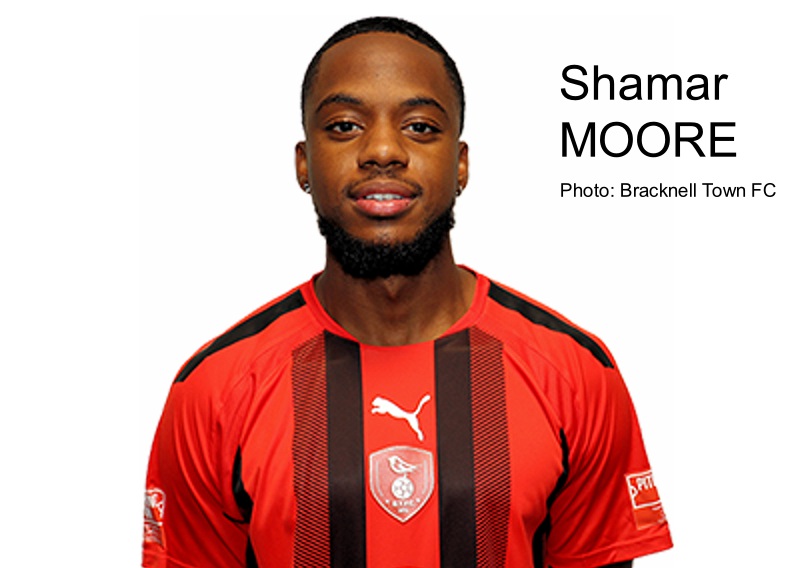 Shamar Moore pictured in the colours of his former club, Bracknell Town.